The International Bluegrass Music Museum is pleased to announce a new benefit concert series to be held at the Museum in Owensboro, Kentucky and beginning this month. ‘Musicians for the Bluegrass Music Museum’ was conceived and organized by Ernie Evans, guitarist for Valerie Smith and Liberty Pike, a longtime supporter of the Museum and its programs.

The series will begin on Friday, March 26th with a performance by the James King Band. More concerts will follow in April, featuring Summertown Road and Kenny & Amanda Smith. There are more musicians who have expressed interest, according to Evans, such as Blue Moon Rising, Brand New Strings and Jeff & Vida.

Evans says he got the idea for a concert series after donating a show with Liberty Pike back in December. “Based on the enthusiasm of a sold out crowd, it occurred to me that if other bands were to follow suit, that a series of concert could have a huge impact that would benefit the museum,” Evans says.

“I realize that funding is difficult for any non profit organization today and after visiting the museum it became obvious to me that it is costly to maintain a first class facility like IBMM.”

Evans himself will take part in the concert series with a performance later this spring with Liberty Pike celebrating the release of their new CD, Blame it on the Bluegrass, recorded at the Museum during their Bluegrass in the Schools residency in January.

Evans is busy recruiting more bands to the cause through his personal connections and through social networking. He created a group on Facebook called ‘Musicians for the Bluegrass Music Museum’ to spread the word throughout the bluegrass community.

Any bluegrass bands are welcome to help, Evans says. “Most artists that are touring nationally will, at some point in time, travel through or close to Owensboro,” he says. “We are flexible on what day of the week concerts can be held. So it can be convenient to the artist’s itinerary.”

Even if bands don’t travel to Kentucky, Evans says they can still assist by helping to spread the word. Bands can also become members and can donate proceeds from special shows.

The price for the ‘Musicians for the Bluegrass Music Museum’ series will be $10 per ticket. All performances will take place at the Museum at 7 PM. For more information on tickets and specific dates, see www.bluegrassmuseum.org or call 888-MY-BANJO. 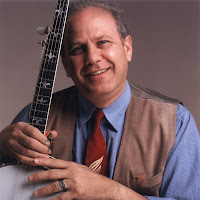 For the first time ever, the Bluegrass Museum’s ROMP activities will include a music camp. Pete Wernick’s Jam Camps have inspired “closet pickers” all over the country and will make a stop in Owensboro during ROMP, June 21st-24th. The camp will be held at the Museum from 9:00 AM to 5:00 PM Monday through Wednesday, and 9:00 AM until 11:00 AM on Thursday. Pete plans to include special guests and top bluegrass talent to help teach at the camp.

Bluegrass jam camps were first conceived by Pete to help encourage novice fans to participate in the bluegrass community. “A jam camp is to help closet players or people getting into bluegrass—or even more experienced musicians—develop their ensemble skills,” Pete says. “A lot of people are learning to play bluegrass, but are rarely taught the skills involved in playing as part of a group.” 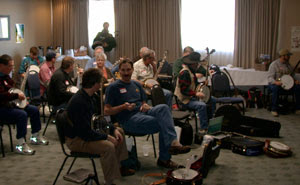 Pete uses a variety of teaching methods, including traditional classroom workshops, large group lessons and small group ensemble in a fun, low-pressure environment. “In a few days, everyone gets the hang of the process. Even if they can't lead a song or take a solo, they can be a ‘follower-alonger’ as we say.”

Using multiple teaching strategies ensures that everyone is included in the learning process, Pete says. “People learn all sorts of ways, but one thing we try to make clear is that bluegrass is not about reading chord changes or solos from a piece of paper or only being able to play what you've memorized,” he continues. “We show how to follow along by watching and hearing the basic chord changes, which is the key to making it all work. We even teach how to solo convincingly when you barely know the song, but are just going from the chord pattern.”

Soloing isn’t a requirement nor is it the main focus of the camp, according to Pete. All that is required of potential Jam Campers is the ability to tune their instruments and change smoothly between G, C, D and A, nothing more. “We especially like to welcome people who have been struggling with trying to play instrumental solos as a way of starting to play bluegrass,” Pete says. “We tell them to never mind that, it's more about following chords, keeping rhythm and hopefully doing some singing. It's often news to them that singing is more fundamental than instrumental soloing, and that we don't expect people to play at fast tempos.”

Pete, who was a long-term president of IBMA, says he’s especially pleased at the success of the Bluegrass Museum and is looking forward to seeing old friends and returning to the Riverpark Center. “This building and the IBMM are living monuments to the dedication of people worldwide to the beauty and power of bluegrass music,” Pete says. “As a native of New York City, I understand if people are surprised at my lifelong commitment to bluegrass, but it feels as natural as can be, and returning to Owensboro and the Museum are going to be among my highlights of 2010.”

For Jam Camp information and registration, point your browser to DrBanjo.com.
Posted by Bluegrass Music Museum at 12:15 PM No comments: