The International Bluegrass Music Museum will open its Bill Monroe Exhibit as part of the worldwide Bill Monroe Centennial Celebration on September 10, 2010, just three days prior to what would have been Mr. Monroe’s 99th birthday. The opening will begin at 6:00 p.m. (CST) at the IBMM, 217 Daviess Street, Owensboro, KY 42303, and will include a reception with food and drink, as well as an all-star bluegrass concert, with faculty from the Monroe-Style Mandolin Camp performing.

Featured in the Bill Monroe Exhibit are many of Monroe’s personal artifacts and clothing, records and other items, illustrating the impact of his long and eventful career, which spanned nearly seven decades and resulted in the creation and global propagation of one of America’s scant original musical genres. Showcased in this exhibit will be two major artifacts never before displayed in a museum setting: Uncle Pen’s fiddle and the famous headstock veneer from Bill Monroe’s mandolin. 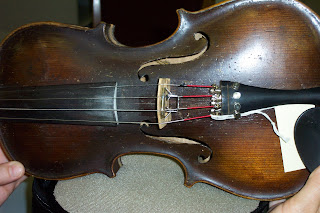 Bluegrass musicians and fans know that this fiddle and its owner, Pendleton Vandiver, were enormously influential in Bill Monroe’s life. After the death of his parents, Bill, then age 16, lived with his Uncle Pen, who taught him mountain and Celtic fiddle tunes which Bill transposed onto the mandolin, making him one of the first to play the mandolin in this manner.

Uncle Pen’s fiddle was acquired by one of the most instrumental people in establishing the IBMM, Terry Woodward of Owensboro, Kentucky, who has gifted the instrument to the museum for the duration of the centennial celebration. This fiddle has been used in recent recording sessions by fiddlers Ricky Skaggs, Stuart Duncan, Fletcher Bright and Tim O’Brien to record a soundtrack for a motion picture being made of Bill Monroe’s life starring Golden Globe-nominated actor Peter Sarsgaard.

The other major artifact, the original headstock veneer from Bill Monroe’s world-famous Gibson 1923 F-5 Lloyd Loar mandolin, is part of a legend well-known to fans and it is considered by some to be the quintessential bluegrass relic. After a disagreement with Gibson, Monroe removed the company’s name from the headstock with a pocketknife, leaving only the word “The.” He performed with the mandolin in that condition from around 1951 until 1980 when Gibson replaced it along with completing several other repairs. It was thought to have been lost or scrapped until recently. 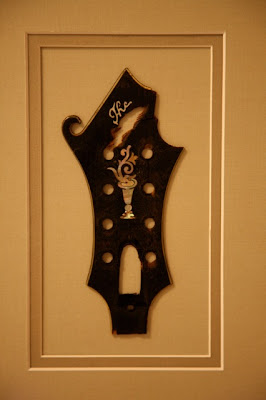 The veneer was auctioned at Christie’s in New York City in December of 2009. The IBMM’s executive director, Gabrielle Gray, made the trip from Owensboro hoping to be the top bidder and acquire the artifact for the museum. She was outbid by Laura Weber Cash, an accomplished vocalist and award-winning fiddler, who has agreed to place it on loan to the museum.

Laura Weber Cash, an accomplished musician with an impressive vocal resume, won the highly coveted first place award in the National Fiddle Championship both as a 17-year-old in the Junior Division and 20 years later in the Adult Division. She is married to John Carter Cash, grandson of Maybelle Carter and the only child of June Carter Cash and Johnny Cash. John is carrying on the family tradition as a singer, songwriter and record producer. Laura and John graciously agreed to loan their newly acquired artifact to the museum for the duration of the centennial celebration.

Coinciding with the Bill Monroe Exhibit opening will be the 5th annual Bill Monroe-Style Mandolin Camp, which draws campers from around the world to learn the legendary, virtuosic, idiosyncratic mandolin style that Monroe created and perfected over many decades. Campers are treated to an annual concert—essentially heaven for mandolin players—with some of the best instrumentalists in the world playing music in the manner Bill Monroe made famous.

The art exhibit is comprised of visual artwork by dozens of artists inspired by the music of Bill Monroe. The various forms of art depict specific songs or lyrics. The songs play in the exhibit hall and lyrics are posted beside the art. This exhibit will remain at the museum throughout the centennial celebration period. All works are for sale, with the museum receiving 40% of the proceeds.

The third Bill Monroe Centennial exhibit will open September 13, 2011, his 100th birthday, and will feature the artifacts of The Blue Grass Boys—the legendary members of Bill Monroe’s band over many decades—as well as expand upon the Bill Monroe Exhibit.

The International Bluegrass Music Museum is located in downtown Owensboro in the RiverPark Center Complex, 217 Daviess Street. Hours are Tuesday through Saturday 10:00 a.m. to 5:00 p.m., and Sunday 1:00 p.m. until 4:00 p.m. For information call 270-926-7891 or visit the museum’s website: http://www.bluegrassmuseum.org.
Posted by Bluegrass Music Museum at 2:00 PM No comments: