2011 Bluegrass in the Schools

The International Bluegrass Music Museum is proud to announce the successful completion of its 9th annual All-School Bluegrass Assembly Programs. These assemblies are key components of the museum’s far-reaching Bluegrass in the Schools program. 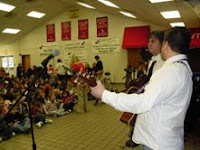 Universally known as the Father of Bluegrass Music, Bill Monroe was born and grew to manhood in nearby Ohio County, Kentucky. 2011 marks the 100th anniversary of his birth on September 13, 1911. 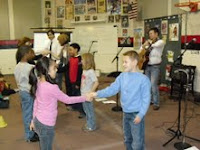 The program was led by the museum’s education director, Randy Lanham. 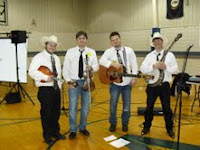 Randy played the fiddle and was accompanied by Jeff Hardesty on guitar, David Morris on banjo and Danny “Hootenanny” Clark—the newest member of the museum staff—on mandolin.

Slides were shown of original artwork created by dozens of artists inspired by Bill Monroe songs. The original art is on display at the museum in “The Bill Monroe Centennial Art Exhibit” through September 12, 2012. 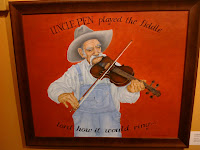 This year’s Bluegrass in the Schools program reached an audience of over 8,500 students. The overall crowd favorite was Monroe’s original tune, “Uncle Pen,” which commemorates his uncle Pendleton Vandiver’s now-famous role in teaching young Monroe how to play fiddle tunes and adapt them to the mandolin…at breakneck speed. Uncle Pen’s fiddle is on display at the museum, as well. 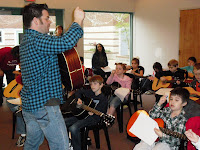 For students whose interest is sparked by these annual assembly programs, the museum hosts the Kentucky BlueGrass AllStars’ Saturday Lessons Program.

The program is bi-weekly and allows regional residents of all ages to take group lessons on the fiddle, guitar, banjo and mandolin. The museum supplies instruments and professional instructors. 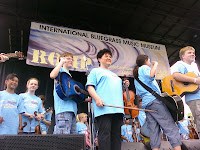 The Kentucky BlueGrass AllStars perform each year at ROMP, the museum’s festival. In 2011, the AllStars will perform at 12:00 noon on June 25 on the Main Stage at Yellow Creek Park.
Posted by Bluegrass Music Museum at 11:02 AM